I really need to commit to some time sitting down and getting a good understanding of my workflow in dealing with pictures rather than muddling along. That's fine for 1 or 2 pictures but when there are larger sets, it's unmanageable.

Out of 32 pictures that I took, there were 8–10 that were good. To isolate them from our other animals, we took them up to our bedroom.1
At first the kittens were naturally a bit freaked by their new environment. This is natural. Only one picture from the first batch really worked: 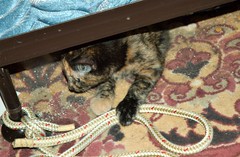 Rope and string has a way of getting past nervousness and into play for kittens.
Cindy and I went off to have dinner and let the kittens discover their new home without interference. We went back later and they were a bit more relaxed. Simon was the most adventurous although as I came down to play with the photos, Zoe was checking out the top of the bed. Yay. I chose six of the photos, uploaded them to Flickr, and put them into a set: 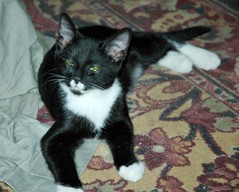 1. The bedroom used to be kitaya's exclusive domain and we never got around to changing that. Serves us well now.

It's Gaming at StrangeLand; this time with kittens! It's on Wednesday, August 30th at 7.00p. If you need directions to get here, please ask.

The following are the dates that I expect to gaming to happen for August and into September:

As you can see on here,

happilymyself has decided to set up gaming at her place on the Wednesdays that it's not happening at Strangeland.

In the past, we've played San Juan, Cricket Cricket, Carcassone (Hunters and Gatherers)/Carcassone (Medieval w/most expansions), Settlers/Seafarers/Cities & Knights of Catan, Apples to Apples, Nodwick, Fluxx, Chrononauts, ImaginIff, Falling, Snits Revenge, Awful Green Things, Illuminati, Lunch Money, Filthy Rich, Munchkin (with supplements), Killer Bunnies and others. It depends on what the folks that show up prefer as well as what they bring. Folks are welcome to bring their own games as well.

Note that many people _haven't_ played these games. Most of them are not overly complex and some can be taught on the fly. We do teach the rules before we play, so don't worry if the games aren't familiar.

It's okay to show up a little late to his since we usually play something light first, waiting for folks to show up.

Please feel free to show up. Bring snacks if you'd like although some snacks will be provided.
Collapse